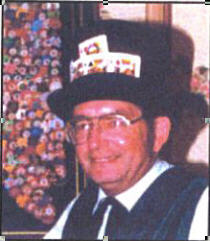 “CT,” Chuck or Charlie has been a collector of one thing or another for the past 50+ years, from pop bottle caps early on, and then stamps, coins, paper money; to odd and curious items from around the world. CT had bought and sold and traded stock certificates and bonds from around the world. He liked Disney Money so much that he published a catalog on that specialized material several years ago. He started his mail order business (C.T. Coins) in 1954 when he was only 13 years old!

CT found his way to Las Vegas in the early 1960’s, and there he found new items to offer in his mail order catalogs casino chips and gaming tokens. Charlie became Charter Member #033 out of the first 100 people to join the fledging organization that we know today as CC&GTCC. Charlie says that two years after the club was officially formed, during the 1990 ANA convention in Seattle, he proposed that we have a annual chip & token award of the year. The following year, in 1991 at the ANA convention in Chicago, CT was appointed as Advertising Manager of the CC&GTCC club magazine: a position that Charles has held ever since. He was a staunch contributor to the institution of ANA’s new exclusive exhibit category for casino items, which used to be relegated to a miscellaneous category.

Charlie has received several exhibitor awards for the chip displays he has set up at the ANA conventions over the past few years. He has also been honored on several occasions by CC&GTCC as the Top Recruiter for signing up new club members and has also taken part in a number of educational panel discussions at the club’s annual conventions. Charlie has had a bourse table at every one of the CC&GTCC conventions and has sponsored and co-sponsored several privately-run commercial chip shows in California and Nevada.

He and his wife Margarita live in Southern California.