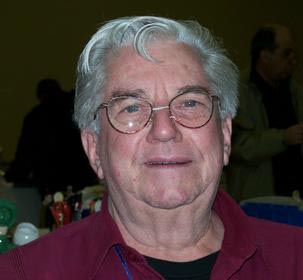 Carey Burke has lived in Las Vegas for 65 years, which means that he’s seen most of the development of what is now the Las Vegas Strip as well as the massive changes that have taken place over the past 20 to 30 years.  He has collected gaming memorabilia for at least the last 40 or 50 years.

Burke’s interest has always been the history of Nevada gaming as well as the collecting of chips and other gaming material.  It is unlikely that you have not benefitted from his knowledge of Las Vegas history, because he has always been generous with his time and information for anyone who has shown an interest.

Carey is the Club’s Historian, and serves on the Committee for the Museum of Gaming History.  He has presented seminars at our conventions and has put together extensive exhibits at the conventions.  He has volunteered at just about every convention, in setup, teardown, information tables, and as a speaker.  He is a recipient of the CC&GTCC President’s Award.

He has been an officer of the Silver State Coin Club, the Las Vegas Antique Bottles & Collectibles Club and the Southern Nevada Chip Collectors Club.  He’s a member of the Token and Medal Society, the Las Vegas Historical Society and the California Exonumia Society.